HAT’S IN THE RING!

HAT’S IN THE RING!

He will tell you it’s “just silliness,” running for President of the United States.

But John Chester, who’s already President (and co-owner) of Wild Apple Graphics, Woodstock, VT, is dead serious. At least, as serious as a leader can be whose job description also says “janitor” and whose company core values include “Eat Chocolate.”

John’s single goal, he explains, is to create awareness of copyright infringements, mostly in China, that have been plaguing the surface design business for years.
​
“I thought running for President would be a fun way to get attention within the industry,” John says. The idea came to him from an NPR report on how easy it is to register to run for President. So easy, in fact, at last count, there were some 1,300+ fringe candidates, among them, a few dogs and cats.

John’s campaign is even more low-key than the other Vermonter who is running for President, seriously. No campaign headquarters, no budget, no desire to take part in the candidates’ debates.

He does have a clever logo: ©hester For President. And a bumper sticker with fellow Vermonters Ben & Jerry’s logo, reading “©hester for President. Vote for copyright protection.”

“You bet I made sure to get their permission,” John sticks to the subject. 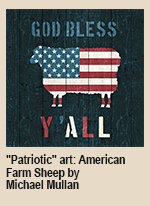 “I will not discuss war, abortion, any issues other than copyright,” he declares. There, he’s thoroughly informed and boots-on-the-ground involved: since 2012, he’s led a twice-yearly charge of industry players to the big home decor fairs in China, sometimes with as many as nine in the battalion.

“You can see the exhibitors’ eyes roll when we walk in to confront any who are violating copyrights,” John reports. How do they take it? From “very cooperative to a shoving match!”

But the campaign is having “a huge impact,” John says. “The real weapon we have is that the Chinese want to be global and they know they have to play by the rules.

“The concept of copyrights is becoming mainstream in China. Our customers (those who pay royalties) are excellent watchdogs. Every week we get a couple of alerts about copyright infringements.”

And since John’s not out there stumping, he can jump right on the problem.

“It’s a marathon,” he says. And he doesn’t mean the race to the White House.