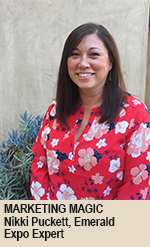 Her business card reads, straightforwardly enough, “Marketing Director.” But Nikki Puckett is also a magician of sorts: she conjures ways to materialize crowds that fill exhibitors’ booths at SURTEX 2016 with attendees looking for more creative magic — works of art and design that will, in turn, evoke crowds of happy consumers.

Nikki doesn’t pull her marketing magic out of a hat, however. With a BA in business from Rhodes College (she grew up in Horn Lake, MS) and an MBA from Ole Miss, she has spent her entire career working trade shows, beginning with the Nightclub & Bar Show in Las Vegas. When that show was acquired by Questex Media, there just happened to be a job opening in the new company’s marketing department.

Presto! Change-O! Nikki was soon reporting to Liz Crawford, who is now VP Emerald Expositions and Director of SURTEX.

“In a month’s time, my doggie and I were heading to our new job, sight unseen, meeting it and California for the first time,” Nikki relates. It wouldn’t be the last. Nikki joined Emerald Expositions in 2013, once again working on Liz’s team. Emerald took over SURTEX in 2014 when it acquired the show’s long-time producer, George Little Management (GLM). Nikki came aboard as Marketing Director soon after SURTEX 2015 in May.

Nikki reports that marketing SURTEX, a B2B all about design, color, and art, is a far cry from previous assignments involving nightclubs, bars, and sports licensing. “Working with artists has been a new and different experience…a marketing challenge.

“Even when I explain the show to people, it may not be getting through. But when you do get it, you really get it! Now, I can’t stop seeing licensed art everywhere I look! Take Christmas: I recognized the snowman on a gift bag. It was by a SURTEX exhibitor!”

For details on some of the new marketing incentives already in play for SURTEX 2016, see “Perspectives” and “Updates & Upgrades” in this issue. Also on the agenda is a Kick-Off Party March 13 during New York Home Fashions Week, sponsored with Home & Textiles Today magazine, the major trade publication.