TRAVELING 24,000+ MILES TO COLLECT THEMSELVES AT SURTEX - Surtex

TRAVELING 24,000+ MILES TO COLLECT THEMSELVES AT SURTEX 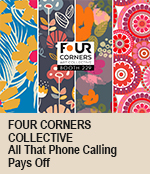 Talk about face-time! Four members of aptly named Four Corners Art Collective will meet “in real life,” as member Beth Schneider puts it, at SURTEX in May for the first time.

Never mind that they’ve already been working together — and with the three other artists who make up the collective — via long-distance since the group met via an e-course on design last year. Collective members Kevin Brackley and Jocelyn Proust are heading to SURTEX from Australia; Emma McGowan flies in from London, and Beth journeys east from Chicago –a total of 48,214 miles round-trip, as Beth points out.

“It’s been a fun challenge to coordinate everything across different time zones.”Jocelyn observes. “The Australian contingent had had to cope with some very early morning phone calls!”

Various members of the collective have met before in Paris, Glasgow, Bath, and Sydney. But coming together in New York is “kind of the ultimate blind date!” says Emma. “We are thrilled to be able to launch ourselves at SURTEX.”

According to Kevin, “Each of us has our own signature style, but we’re united by a love of color and a commitment to quality and attention to detail.”

Already successful individually, Beth reports that Four Corners designers have worked in a range of industries for a roster of clients, including such boldface brands as Nikon, Crane & Co., PayPal, Procter & Gamble, Shutterfly, and Warner Bros.

Other members of the group are Scottish designers Jane Kirkpatrick of Glasgow and Julie Anson of Inverkip, and Pippa Shaw of Aix-en-Provence, France.

Urges Beth: “Come by (the Four Corners booth) and see for yourself how those early morning planning calls worked out!”