It’s a well-tested formula. “Vacations Promote Creativity” headlined abouthealth.com in its online reminder that we should all take time off to regenerate as we vegetate.

“Vacations stave off burnout,” the health site declares. “Vacations can help with your job performance.”

Ahead lies cold dark winter, many hours indoors over a drawing board or keyboard. While the sun’s still warm and shining, do as plein air painters do: let summer’s memoirs and memos feed your art though the coming season. Here’s how that’s paid off for these SURTEX exhibitors. 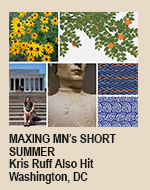 KRIS RUFF, Shoreview, MN — “Summers in Minnesota are so short, I spend as much time outdoors as possible. I draw inspiration from wildflowers and plants growing along a nearby trail that winds along a creek through meadows and woods.

“My new Orange Grove art was inspired by one of those walks. Of course, we don’t actually grow oranges in Minnesota, but my branches needed a pop of color, so they evolved into an orange tree! 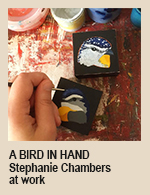 “I guess that’s the great thing about inspiration: you can never be sure where it will lead you!”

STEPHANIE CHAMBERS, Brooklyn, NY — “Since I primarily paint plants and animals and live in a city, I’m always heading out of town to be in nature and take reference photographs. This Summer, though, I decided to stay put in Brooklyn and explore the nature in NYC by starting a bird watching club. 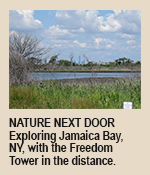 “Composed entirely of artists, we spent time in all the big city parks, in addition to the Jamaica Bay Wildlife Refuge, which is the only wildlife refuge in the entire National Parks System. It also happens to be right next to JFK airport. But once you’re out there, you hardly notice.”

“It was shore bird season when we went and we saw piping plovers, oyster catchers, terns and gulls. And although the ocean breached the bay during Hurricane Sandy, wildlife is still plentiful. “I’m already working on a series of NY shore bird paintings.”

MITSUSHIGE NISHIWAKI, Etching Art News, Tokyo — Because traveling informs his etchings, Mitsushige is constantly on the go, he reports. 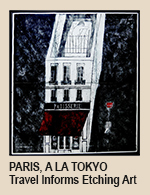 “I created drawings for identity and package design for RITUEL (a new brand name for “Du Pain et Des I’Dees,” the famous Paris boulangerie that opened its first shop abroad in Tokyo Aug. 21.

“The design concept is Paris,” Mitsushige reports. “So I created typical images,” including the Eiffel Tower, cafes, and other Parisian motifs he’s noted in his travels.

Also on his post-SURTEX scorecard: French fashion brand Made in Sens is using Etching Art on its Spring-Summer 2016 collections, and Canadian Interior Company has signed a contract for wall decorations.